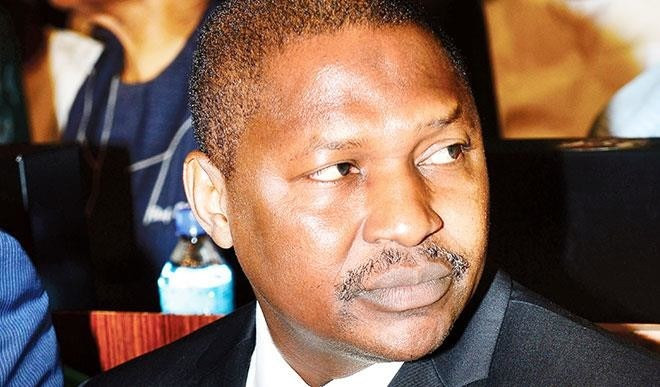 The Attorney-General of the Federation and Minister of Justice, Mr. Abubakar Malami (SAN) has written to the Independent National Electoral Commission asking the commission to  postpone the National Assembly elections and the governorship and state House of Assembly polls in Zamafara State to enable the All Progressives Congress to field candidates in the exercise in the state.A copy of the three-page letter bearing Malami’s signature and dated  February 13, 2019  with reference number MJ/DSD/03, emerged online early Thursday.The letter is without the acknowledgement stamp of the office of INEC Chairman, Prof. Mahmood Yakubu, to whom it was addressed.Punch reports that Malami, in the letter, which he said was informed by a petition he received from the law firm of M.A Mahmud & Co.,  anchored his request for the postponement of the elections in Zamfara State on a judgment of the Sokoto Division of the Court of Appeal.The minister, a founding member of the APC,  said in the letter that the Court of Appeal’s judgment delivered on Wednesday affirmed an earlier verdict of the Zamfara State High Court which had held that the party conducted valid primaries for the various elective positions in the state.Malami said granting the concession of postponing the polls in Zamfara State in the light of the Court of Appeal’s judgment, was not a matter of doing APC a favour but a right the party was entitled to.“In view of the fact, now that the Court of Appeal has upheld the primaries as valid, the APC in Zamfara State will need a little time to catch up with its contemporaries in the election.“Granting them this concession is not necessarily a favour but a right that inures to all contestants under similar circumstances. Consequent on the above, INEC is invited to comply with the judgement of the Court of Appeal by admitting the results of the APC Zamfara State Primaries and to also comply with the provisions of Section38 of the Electoral Act which empowers INEC to postpone the election for the governorship, National Assembly and House of Assembly Elections.” he saidThe minister’s claim was however debunked by  Chief Mike Ozehome (SAN), a lawyer acting for Senator Kabir Marafa and others involved in the appeal. Speaking to newsmen, Ozekhome said,“There is absolutely no legal basis whatsoever for this letter which is clearly meant to circumvent the judicial process already activated by all parties concerned. I act for Senator Kabiru Marafa, Hon Dauda Lawal and others.”INEC had insisted that it would not accommodate APC’s candidates in the forthcoming polls due to the party’s alleged failure to conduct valid primaries in the state.The Zamfara State High Court, however, ruled in its judgment that the party held valid primaries, contrary to a pronouncement of the Federal High Court in Abuja, that the party did not conduct any valid primaries.In the face of the two conflicting judgments from the courts of coordinate jurisdiction, INEC insisted that it would stick to its original position that the APC failed to conduct valid primaries in the state and therefore would not be allowed to field candidates for the polls.Malami, however, stated in his letter to INEC that the Sokoto Division of the Court of Appeal in appeal marked CA/S/23/2019 affirmed the Zamfara State High Court’s judgment and nullified the Federal High Court’s.He, therefore, asked INEC to invoke the provisions of section 38 and 39 of the Electoral (Amendment) Act 2010 to postpone the elections in order to give room to APC to field candidates and catch up with its contemporaries in the polls.“You may further wish to recall that In Suit No.FHC/ABJ/CS/1279/2018 – ALL PROGRESSIVES CONGRESS (APC) V. INEC & 5 ORS, the Federal High Court held that the nullification of the said Zamfara APC primaries by INEC was lawful. However, this decision has been upturned in Appeal No CA/S/23/2019. Copy is also attached for ease of reference.“In the circumstance and in consideration of the provisions of Sections 38 and 39 of the Electoral Act, 2010, the law allows INEC the latitude and discretion to extend the time within which a political party may duly field a candidate for an election where unforeseen circumstances constrained such a party from doing so within the stipulated time frame.” he said The post AGF Malami writes INEC, asks for postponement of election polls in Zamfara appeared first on Linda Ikeji Blog.

“Weed Selling is in My Blood” – Man