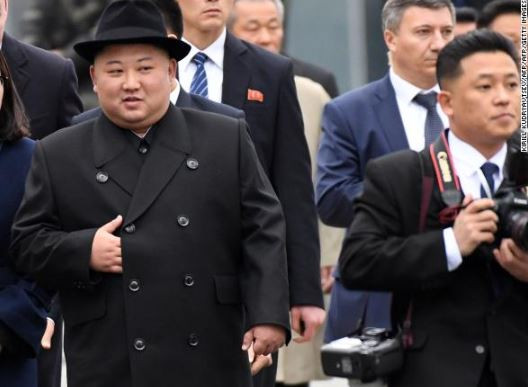 North Korean leader Kim Jong Un has arrived in the Russian city of Vladivostok ahead of his planned summit with Russian President Vladimir Putin.   Russian state television showed Kim stepping out of his green private train at a railway station in the eastern port city on Wednesday afternoon wearing a black homburg and overcoat, he was greeted at the station by officials and a brass band but Putin was not part of the welcoming committee. Kim and Putin are set to meet for the first time on Thursday, but do not plan to sign any agreements or make a joint statement. The young North Korean leader left the capital of Pyongyang on Wednesday at dawn and traveled to Russia by train, as he did for his summit with US President Donald Trump in Hanoi, Vietnam. The journey from the train station in Khasan, near the North Korean border, to Vladivostok took about nine hours. After crossing the Russian border, Kim stopped at the Khasan station where was presented with flowers as well as bread and salt — a Russian tradition for welcoming guests — local lawmaker Natalia Karpova told Russian state news agency TASS. Kim said he was “happy to be on Russian soil,” the Russian region of Primorsky reported on its official website.The post North Korean leader, Kim Jong Un arrives in Vladivostok ahead of his first meeting with Russia’s Vladimir Putin appeared first on Linda Ikeji Blog.

Argument ensues on Twitter as Kim Kardashian is criticized for profiting...