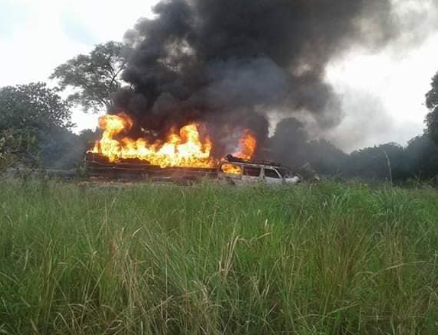 No fewer than 50 people perished in a fire incident at Ahumbe village, Gwer local government area of Benue State after a petrol tanker exploded on Monday evening, July 1st. According to reports, the tanker fully loaded with petrol coming from Aliade, had an accident at a village called Ahumbe. The locals around the area immediately rushed to the scene and were scooping fuel, and in the process the tanker exploded and burnt many to death.

The information officer, Gwer East local government, Christopher Avi, confirmed that over 50 persons were burnt to death while 70 others who sustained various degrees of injuries were rushed to four different hospitals for treatment. According to Avi, the victims were trying to scoop fuel from the tanker when it caught fire and exploded. See more graphic photos from the scene below.

I get paid to take my pretty face to events- Toke...