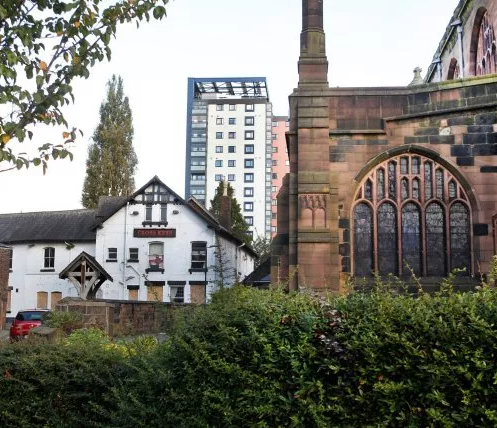 A 17-year-old boy was raped in a church graveyard in a “horrific ordeal” in Eccles, Greater Manchester, police said. The teenager, who will not be named, was walking through the town centre at around midnight when a stranger started talking to him. As they were walking through the graveyard, on Church Road, the victim was punched in the stomach by the culprit, before being raped. A man and a woman took the boy to hospital after the incident, and the victim is now being supported by specially trained officers.A police cordon was put in place at the scene while forensic officers investigated the area. A 30-year-old man was arrested on suspicion of rape on the same day of the incident in the grounds of Eccles Parish Church in Eccles, Greater Manchester. He has since been released under investigation pending further enquiries. Greater Manchester Police are now searching for the man and woman who took the teenager to hospital. They were driving a silver car and dropped the boy off at 1.40am, Metro UK reports. Detective Constable Stephen Hough, of GMP’s Salford district, said: “Specialist officers are continuing to support the teenager and his family as he recovers from this horrific ordeal and we’re continuing to work hard to ensure the person responsible is held to account. “Whilst we have arrested a man as part of our enquiries, our investigation remains ongoing and we know that a man and woman driving a silver car dropped the teenager off at hospital at around 1.40am. “‘I want to stress that they aren’t in any trouble but we really need to speak to them as part of our enquiries so I would appeal directly to them to get in touch with us as soon as possible.”The post Boy, 17, raped in church graveyard in Greater Manchester appeared first on Linda Ikeji Blog.