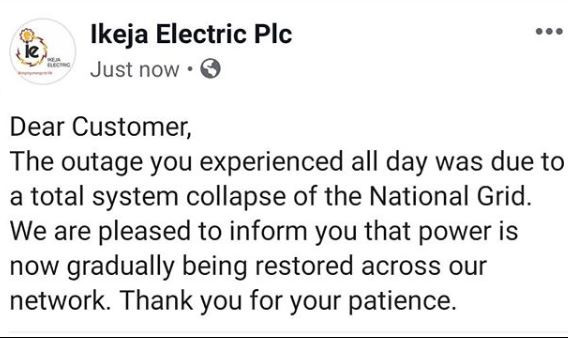 On Sunday, the nation’s power grid experienced a total collapse plunging consumers across the country into blackout.   Enugu Electricity Distribution Plc disclosed on its Twitter handle that the present loss of supply in the entire South East “is as a result of a system collapse which occurred at 09:21 am of yesterday, 30th June, 2019. This is as a result of fire outbreak on Benin 330KV transmission line reactor. As a result of this unfortunate development, there is zero supply to all customers in our franchise areas as all our injection substations are affected.”   Kaduna Electricity Distribution Plc also informed its customers of the system failure from the national grid.  “Dear esteemed customers, we are currently experiencing a system collapse from the national grid hence the power outage in our franchise states. Normal supply to our customers will resume as soon as the national grid is back up and stable,” it said on Twitter. The Managing Director of Transmission Company of Nigeria, Mr Usman Mohammed, confirmed the development saying the TCN would issue a statement soon. The TCN, which manages the national grid, is still fully owned and operated by the government.The post Nationwide blackoutas national power grid suffers total collapse appeared first on Linda Ikeji Blog.